This week brings us two episodic reviews to Fruits Basket and I have to say that my excitement for this remake hasn’t dwindled at all!

Both episodes were spot on and full of excitement, with a splash of humour thrown in for good measure. The remake follows the anime to a T and even has minor details like Takaya-sensei’s captions and what a minor character is doing in the background of a scene, have managed to make the cut, now whilst this may change somewhere down the line, it does give me some hope that this adaption will remain faithful to the source material in terms of its tone and story. Not to mention that, should the remake continue to adapt two of the manga chapters into one episode, (as this episode did), it won’t be long till more of the Sohma’s start showing up! But for now lets concentrate on the next two episodes!

In the second episode I am introduced to the opening to the remake of the anime, and I have to say that I do love it and think it suits Fruits Basket (2019) very well, (well the song does), though I do find it strange seeing most of the characters staring of into the distance and not knowing or understanding why they’re doing it. I do find the borders very touching and so pretty to the point that they do some how blend everything together.

As for the ballard, “Again” by Beverly, it’s such a soothing song and suits Fruits Basket very well! 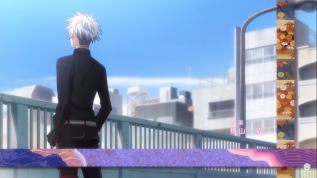 In this episode we get a glimpse of the head of the Sohma Clan, Akito. To me Akito is my least favourite character of Fruits Basket, due to the trauma that they seems to love putting most of the Sohma’s through. I do know that Akito becomes the catalyst for many of the manga’s most thrilling developments, but it still ends up with me just not really liking them that much at all! Anyway even without meeting Akito, we do get a small insight to their personality and what kind of person they are…At the mention of Akito’s name, Yuki turns his back to everybody else. Is he trying to hide how he feels about them?

We’re then introduced to a flashback of a much younger Yuki questioning Akito, with Akito responding that people would be sickened to behold his rat form. Harsh words and words that demonstrate that Yuki has been conditioned, from such a young age, to think that people would be disgusted by his zodiac form and feel disgusted by it. These things, combined with Yuki’s suggestion that Akito may be using Tohru, for some unknown (yet insidious) purpose, tells you all that you need to know about them – that Akito is a malicious person and shouldn’t be trusted!

We also get to know more about Kyo this episode after his dramatic entrance in episode one, Hot-tempered, impulsive, and lacking any kind of social grace, Kyo certainly doesn’t leave a good first impression! It doesn’t even help his case when he keeps accidentally hurting poor Tohru, who keeps finding herself in the wrong place at the wrong time and bearing the full force of his anger and frustrations.

It is obvious that Kyo and Yuki are both the ying and yang of the Sohma family, Kyo seems to be the opposite of Yuki in so many ways. For instance, Yuki is cool, calm and collected, where Kyo is rash, brash and impulsive. People are more drawn to Yuki due to his gentle demeanor but are immediately pushed away by Kyo’s abrasive personality. With that said one thing is clear, both Yuki and Kyo don’t value themselves very highly, with Yuki being surprised that Tohru isn’t disgusted by is rat form and Kyo questioning why anybody sane would ever love him.

Maybe they aren’t that different after all? Will they ever get along? We’ll see!